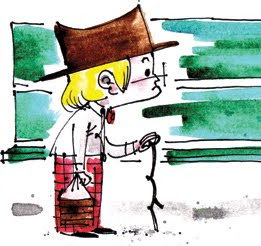 I'm happy to announce that The Boys will be released tomorrow, Tuesday, February 23. I have no idea where you'll be able to buy it in the real world, but you can always try the internet.

The Boys received an excellent, thorough review from Betsy Bird, over at A Fuse #8 Production, and a starred review in the latest issue of Kirkus Reviews. Unfortunately, I don't have a subscription to Kirkus, so I can't link to the full review. This is what it says:

It’s a new town for a baseball-loving protagonist. Newman wastes not a moment, setting the stage with the title page: A lone moving truck chugs along a house-lined street, skyscrapers looming above. A white spread possessing only one word, ‘Tuesday,’ greets readers, with single brush strokes and blocks of color denoting a glove, a ball, a bat and a solitary boy lacing up his shoes. But the anticipated game is not to be, as the shy hero watches the sport longingly from afar. Crest fallen, he sits by a set of elderly men, and baseball dreams are traded for books, then costumes, as the child determinedly tries to stay on the bench of retirees until the old-timer’s ball game reawakens the boy’s confidence. Effective visual storytelling realizes the aching love players can feel for the game, and in one lovely, lonely beat, the boy’s self-imposed rejection turns to resolve, as the tyke asks to join in a kids game. Through confident brushwork, done in a stylized 50s modern aesthetic, the artist’s images reveal sports’ deep truths about acceptance, a willingness to try and the intergenerational connections they bring.

I also participated in an interview at Seven Impossible Things Before Breakfast. Thanks, Jules, for having me as a guest.

On a personal note (which every post on this blog is, I guess) I want to say to my family and friends, and especially to my wife, Jodi, who, although she probably wouldn't describe herself this way, is the most patient person I've ever met, that I couldn't have finished The Boys without your encouragement.

I promise the next one won't take so long. 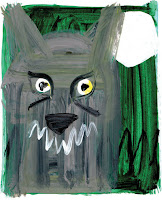 Posted by Jeff Newman at 1:48 AM No comments: